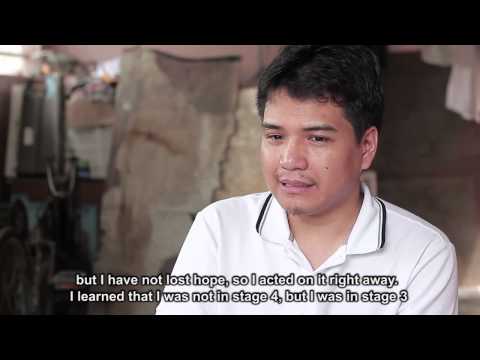 I am Baltazar C. Lucas, 32 years old. I have been diagnosed with Liver Cancer from Hepatitis B. Between 2008-2013, I lost all 3 of my brothers to Hepatitis B and Liver Cancer. As the last of my brothers remaining, it can be easy to lose hope, but I am also a son, a husband and a father, and I cling to the hope that I will not leave my remaining family prematurely.

I tell my story in the hope that others may learn about how common Hepatitis B is, how deadly it can be, but also how early detection can help.

Fighting For My Brothers

It all started when my youngest brother, Marc Anthony, fell ill in January 2008. He was diagnosed with TB but responded poorly to treatment. After medical exams he was found to have Hepatitis B. We tried everything we could, including alternative therapies but despite our best efforts, Marc deteriorated and died of liver failure before the year ended, shortly before he was to turn 20.
We all decided to have ourselves checked and we found out that we all had Hepatitis B except for my father. I gathered from the internet that if you have it since birth, it’s “chronic” and there is no known cure for it up to this time. I vowed to myself to practice clean and healthy living, avoiding drinking and smoking to increase my chances of surviving the disease.

For a while, life went on for us. The computer shop business was good for my brother Aris, the second sibling. My third brother Joey was a Videographer for the City of Malolos. I got married and had a son. Little by little we were building our dreams.

Unfortunately, the story does not end there. In April 2013, my brother Aris began to feel bloating and “gas pains”. He lost his appetite, got thinner and weaker as the days passed. Initial medication and consultations did not improve his condition and we decided to bring him to Manila for evaluation. Aris was diagnosed with late stage Liver Cancer. We lost Aris in September of that year.

Shortly after Aris passed away, Joey began to feel ill. I had Joey checked and the results were not good. Joey also had Liver Cancer and by that time it had spread to other parts of his body. I already knew what this meant and what will happen.

Against all odds we continued to fight.

I did my research on the internet to know whatever else we can do. I got suggestions, even went to Quiapo, bought stuff and tried stuff to no avail. Joey died November 2013, a month after Aris. He battled the cancer to the very end.

My Own Fight Begins

Given our family history, I had myself frequently tested. But in December 2013, I was surprised to find out that I too already had Liver Cancer despite all precautions. A 10 cm mass in the right side of my liver can cause my early death. I was heartbroken but I refused to think that this was to be the end for me. I was determined to fight!

After consulting with my doctor I had my tumor removed as soon as possible. The operation was a success. I followed all my doctors without question. I became hopeful again and very thankful to God, the doctors and all those who supported me.

In January 2014, I was able to go back to work but was on close follow-up. In May 2014, tests showed that the cancer had come back. I decided to undergo TACE (Transarterial Chemoembolization) to stop the growths while they were small.

At present, I still am not cancer-free. I have been advised that a Liver Transplant will be the next step in this fight against this brutal disease. My Hepatitis B infection is now controlled with medication. I continue to work as a computer programmer as long as my physical condition allows me, to continue to support my family and my medical needs. I am sure that somewhere my brothers are rooting for me to pull through. I am all that’s left of my brothers and I am all that my parents, wife and son have.

It has been a long hard struggle but I remain determined and hopeful. Each day I wake up is a triumph in my fight to live.