Arafat Bwambale is a public health officer and medical clinical officer who is actively engaged in social accountability advocacy and peace building works to support youth empowerment and social justice in Uganda.

He works with Bwera General Hospital in Kasese, and Great Lakes Peace Center in Rwenzori Region, and is dedicated to breaking down harmful misconceptions about viral hepatitis.

Hepatitis B is a prevalent disease in Uganda. There is a high level of political will to tackle the disease in my country and we have made great strides in screening and vaccinating the population; however it remains a major health challenge. According to the Uganda Cancer Institute (UCI), 80 per cent of Uganda’s liver cancer cases are caused by hepatitis B.

I was motivated to join the fight against viral hepatitis through a horrifying personal experience. When I was a newly-qualified medical clinical officer my uncle was diagnosed with hepatocellular carcinoma (HCC) – liver cancer – caused by hepatitis B. While he was in hospital, a rumour started in the family that my uncle’s wife had poisoned and bewitched him. As a result of this rumour, my uncle’s wife was prevented from visiting him in the hospital. Sadly he died two days later. The family also prevented her from attending my uncle’s funeral, and then demolished her house because they claimed she had caused his death. Some family members also sexually assaulted my uncle’s wife and subjected her to gender-based violence.

All of this happened despite me and my colleagues at the hospital telling the family that my uncle had died from liver cancer as a result of hepatitis B. This unbearable and uncalled for situation occurred due to inadequate knowledge and information about viral hepatitis infection in the community. I am certain that more families are going through the same thing, so I decided to spend my last atom of energy informing, educating and communicating about viral hepatitis to help tackle this dangerous lack of knowledge.

As well as helping close relatives and friends living with viral hepatitis with psychosocial support and counselling, I have helped set up a number of initiatives to raise awareness of viral hepatitis in the community and to support patients and their families.

I am a focal person in charge of hepatitis B at Bwera General Hospital, where we raise awareness about hepatitis and have a group which works to prescribe solutions to hepatitis-related challenges. We also have a hepatitis champions programme to support hepatitis B patients in our local areas and the district, and work with other Ugandan organisations for people living with hepatitis B at a national level.

I also work as a capacity-building and mentorship officer at Great Lakes Peace Center, where we work to prevent viral hepatitis and other infectious diseases in rural communities. We do this through raising awareness and through networking and partnerships with local, regional, national and even international bodies who are also committed to eliminating viral hepatitis.

Because many people are still ignorant about hepatitis and think it’s caused by witchcraft or a rudimentary African monster, we work hard to raise awareness, break down stigma, reduce barriers to diagnosis to find the missing millions, and encourage people to get tested. We make sure to involve and support people who are living with hepatitis B, providing psychosocial support and counselling and supporting them when they face discrimination and stigma.

We are also at the forefront of advocacy efforts, and ensure meaningful engagement with stakeholders at all levels, from sub districts to the national Ministry of Health. Our focus is to continue joining with other civil society organisations to ensure more funds are available for community mobilisation, scaling testing to rural communities, and linking the diagnosed to care. 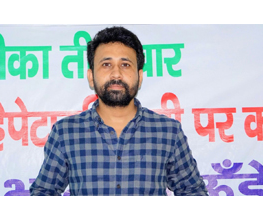 I was a human resources executive in a leading thermal power generation company in India. During a blood donation camp in 2010, I found