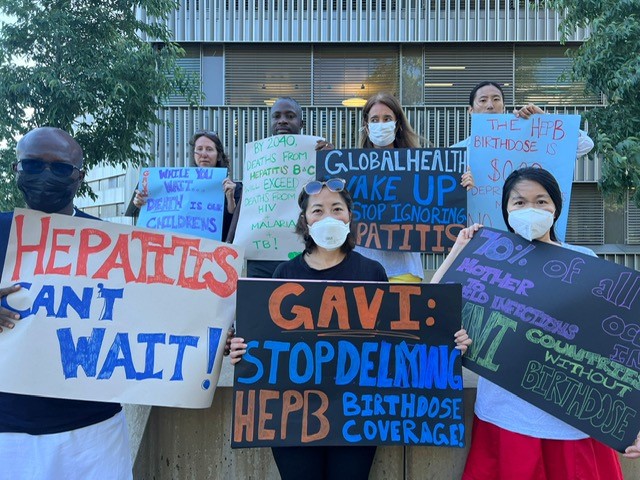 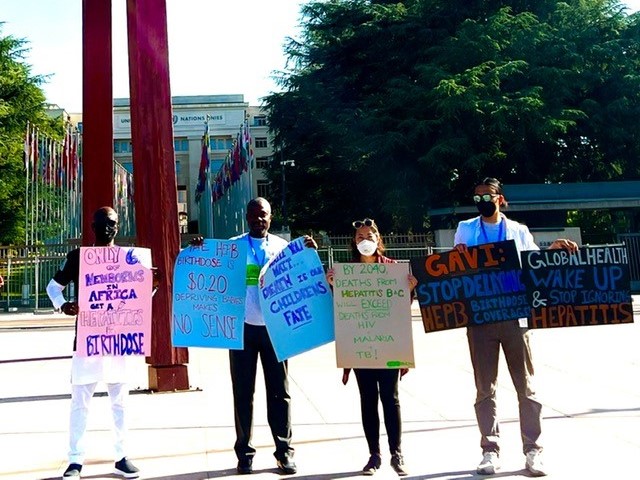 Last week we came together outside Gavi offices in Geneva, to raise awareness and demand that Gavi urgently accelerates the commitment they made to introduce the highly effective and cost saving hepatitis B virus (HBV) birth dose vaccine by resuming their vaccine investment strategy (VIS) programme.

This comes as there has been an ongoing debate between Gavi-supported countries and Gavi on who should pay for hepatitis B vaccination, which was resolved in 2018 by the decision to support the programmatic costs for introducing birth dose. Unfortunately, since then, Gavi birth-dose decision has stayed mute.

Gavi-supported countries have delayed their HBV birth dose introduction efforts, waiting for Gavi’s promised support, since the suspension of the programme due to Covid-19 (March 2020). This delay has had a significant adverse effect, resulting in Gavi supported countries making less progress that non-supported countries in reducing HBV infections among infants (CDAF analysis presented in June 2022 at WHS).

The majority of HBV transmissions are through mother-to-child transmission (also called “vertical” transmission). This is the most common and serious form of HBV transmission, as approximately 90 percent of children infected this way develop chronic HBV infection, and up to a quarter of these infants will die prematurely from HBV-related causes. The younger a person is when they acquire HBV, the greater chance of chronic infection and premature death. The first critical vaccination is known as “birth dose” and must be delivered within 24 hours of birth (as recommended by WHO) to prevent 70-95% of transmission that occurs during or just after birth.

However, the suspension of the VIS by Gavi is leading to up to one million new infections in newborns per year of delay – currently two million and counting – which will likely result in the death of up to 25 percent of those infected, plus substantial costs to communities and health systems for treating subsequent liver cancers.

For close to two years, the hepatitis community has been communicating with Gavi about the suspension of the VIS programme and its impact on hepatitis B birth dose introduction. Despite numerous correspondences and two open letters, no official response from Gavi has been received, nor a timeline regarding the return of the VIS programme.

During this time, despite claims of Gavi that the capacity for introducing new vaccines was limited by their role in Covax, Gavi decided to start supporting the much less effective malaria vaccine. During informal conversations, Gavi members claimed that there was no demand from implementing countries. However, we saw at the WHS that a number of countries are ready for it (Uganda, Mozambique, Rwanda, Ghana, etc), and that some of them have made direct requests to Gavi, which until now have not been considered enough for the VIS to resume.

We call on the Gavi to prioritise internal processes for the implementation of HBV birth dose support, and a clear timeline to be given for each vaccine on the VIS.